The Rainier Quest - Day 7: Apparitions in the Sky 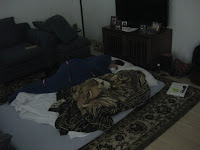 The next day started....slowly. I was up first, and quietly felt the activities of the past few days sink into my body. Yeah, a little sore, and pretty tired. But at the same time I was a bit restless. Wanted to go out and do something. Had kinda wanted to go climbing today, but would have to wait and see what Jody and Francesca were up for - when they finally woke. An hour later I went to go check up on them. They were still sacked out. 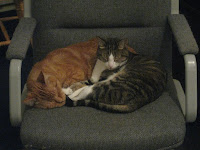 Bob had long gone on his extended weekend backpack trip. Karyn had headed off to work. Their kitties were huddled together, snoozing. The house was pretty quiet.

At some point the girls roused themselves. And we spent a more or less listless morning, recovering from the Rainier adventure. We eventually headed out to breakfast and discussed our plans. Jody was thinking to head back to Portland. I and Francesca wanted to go climbing, but would do so tomorrow (since we had very little energy today and it was already getting well into the afternoon). I made arrangements to reserve a rental car, and Jody brought Francesca and I to it on her way out of town. She was going to then stop off at a spa (don't remember what it is called, but it's supposed to be a Really Good Spa Place) and get worked over before continuing down to Portland. 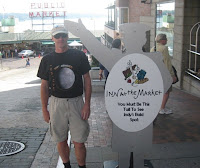 With rental car secured, Francesca and I trotted back to downtown Seattle, to check out the Pikes Place Market once more. The idea was to look for some souvenirs, but we got there so late that stalls were starting to close up. We had to scramble just to grab a late lunch/early supper while we were in the area. Then back up to meet Karyn for dinner.

Karyn had suggested a nearby pizza place for us to go to. It was kinda like a cross between a diner and a restaurant, but I don't remember the name of the place. We ordered various pizzas and chilled out for a while. Partway through dinner Jody called. She was verry tired, had a great, relaxing time at the spa, but was too tired to make the 3 hour journey back to Portland. Could she come back and spend the night at Karyn and Bob's again? Sure! No problem.

It was getting on dusk at this point. We departed the pizza joint and started to head back to Karyn and Bob's. As is my custom, I looked up at the sky to see what there was to see. It was partly cloudy as the twilight deepened, yet you could still see the sky. I knew where the planets were (the few that were visible right now), and what stars were up, but...I still looked up. It's...what I do. 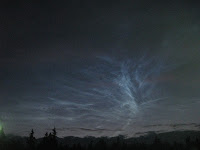 Something caught my eye, low to the northwest. The sun was well down - it had set almost an hour earlier. Yet...there in the sky, was this illuminated patch of light. I stared at it, waiting for it to move. Aurora? Would I actually get to see a display? However, the apparition had structure unlike any aurora I had ever seen. Like frozen lightning. With a ghostly bluish white glow. 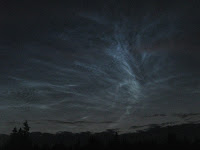 Wait...was this a noctilucent cloud?? (in the link there is a video from the ISS, and you can see a lightning storm below not quite halfway through). A friend of mine had passed the above link on to me mere days before I took off on this trip. But I had forgotten about it - until now.

I got fairly excited. Karyn and Francesca just looked at each other, not understanding. I tried to explain while we were driving back. The twilight deepened, and I was wishing there was a place to stop and take a photo

(or, given my little digicam only goes as slow as 1/8 of a second, that there was a place I could try to take a photo, before things got too dark for my camera to pick up. Karyn suggested the park-n-ride garage a half mile from where they live. Onward we drove!

In a nutshell, noctilucent clouds, if you have not yet googled it or gone to the link above, are thin rarefied ice clouds extremely high up in the atmosphere (50 miles up; not quite halfway to the orbit of the Space Station - and mind you, supercell thunderstorms that ravage the plains of the U.S. "only" reach around 1/10 that height, though the highest is one that formed over India and is thought to have pushed just over 9 miles up). 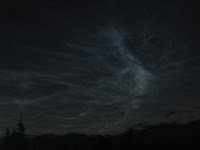 These ice clouds are so far up in our atmosphere that they still catch light from the sun, long after the sun has set for surface-dwelling critters. A friend of mine had sent me the above link a couple days before I set out on this adventure, but after asking various people about them and finding no one had ever seen one, I gave up on this phenomenon. And tonite, there it was.

We reached the top of the parking garage, there were three boys up there test driving a go-cart (no one else was in the parking garage - perfect place for them to play!). They thought at first they were in trouble when the three adults arrived, but when we took no notice of them, they, too, looked up. "What the heck is that?" They came over to ask me after a couple minute's hesitation.

While atop of the parking garage I took a series of photos. The photos above were taken over a span of 5 minutes. You can see the cloud's structure change and alter during that time.

We drove back to Karyn and Bob's. Jody was already there. She, too, had seen the apparition in the sky, and wondered what it might have been.

Back inside again we all hung out, had some dessert, then Jody and Karyn talked "shop" (medical stuff) until late in the evening. Meanwhile something crept over me and put me down and out before any of the rest of them even thought about sleep...
Posted by Indy at 11:54 PM