While I was in exploring the Dolomites of Italy, an email from a geocacher named ClueSeeker found its way into my inbox. I would get it a week later, after I returned from the European adventures.

I would like you to consider joining a small group of us to score caches at the highest and lowest point in the continental U.S. ... in one day. Yes, Mt Whitney and Death Valley N.P.

Please send me a gmail address so I can send you the Google Documents invite. You were the one to inspire me to climb Katahdin this August. What a blast! As usually is the case, I'm thinking of more challenges.

Now, among allllll my other hobbies, I geocache. But most of my geocaching is usually relegated for those times when I can't get out climbing, or diving, or kayaking, or something else. Or when I just need a good hike or visit to someplace "off the beaten path" (more than a few geocaches I've gone for have brought me to little-visited gems in this world, where few others have tread).

Another one of my hobbies is high pointing: getting to the highest point in each of the 50 states. Before this year, I had done 44 of them (45 if you include DC). The ones remaining include Kings Mountain (Utah), Boundary Peak (Nevada), Gannett Peak (Wyoming), Denali (Alaska), Mt Rainier (Washington), and Mt Whitney (California).

The first hurdle for doing Mt Whitney, which happens to be the highest of the high points in the United States outside of Alaska, is to select what day or days (depending on whether one was doing this "in a day" or backpacking) one would attempt the peak and submit it to a lottery drawing, hoping against hope that the day(s) choosen were selected, AND that the weather was favorable. This by January of the year in question. You won't learn until that April if you got what you applied for. Because of this, I had put off doing Whitney for a few more years yet. Just hadn't had time to wrap my mind around the logistics of it,

given everything else going on in Life.

But now I was being asked to go climb it!

Doing the geocaches at Mt Whitney and Death Valley were secondary considerations to my acceptance - here was an opportunity to get to the highest peak in the Lower 48. (at 14,497', Whitney is a mere 87' taller than Mt Rainier; stand on a rock and my head is above 14,500').

With my acceptance, Jeff (geo-handle of Clue Seeker) put together a team of 6. We discussed where to fly in to (Jeff is a SouthWest pilot and an ex-military pilot, and can sometimes get free stand-by passes for people to use), rental car options, where to stay when, what our itinerary would be overall (nutshell: fly in, meet up, drive out, do The Hike, visit Death Valley, drive back, fly home). And we even came up with a team name: Team High Exposure (for going to the highest point followed by one of the most exposed [to weather/heat] points in the States).

Jeff took care of submitting the lottery form. We were aiming for late August - specifically to do the 22 mile roundtrip hike in one day on Aug 26th, 2009. In the meantime I was setting most of my focus on the upcoming Rainier trip in July.

As the Whitney trip drew nigh, there were some adjustments in the team composition (we lost a person, we gained a person, we lost a person - not sure if we gained and lost yet another person or not), ending up with 5 of us for this adventure. We adjusted hotel/motel accommodations and car rentals accordingly. We dropped the second car from the rental, deciding to squeeze everyone into one vehicle (and since this was a non-technical climbing trip, nor a camping trip, we would not have tons of extra gear to slog around).

Our team now consisted of Jeff (Clue Seeker), Dwight (Snurt), Marty (Flying Moose), Harold (Ridgeseeker), and, well, me. As I'll probably use their geo-names and real names interchangeably, it is onto you to keep up. ;)

Our plan was to fly into Las Vegas, stay the night (because some members were arriving in the morning, some in the afternoon) at the same Motel 6 I stayed at back in February when I was out there for the Red Rocks trip, then drive out to Lone Pine, CA, get the hostel room, supply up with necessary foodstuffs, sleep, up at o'dark-thirty, drive up to the trailhead, do the hike up and back, drive to Furnace Creek in Death Valley to get our rooms there for the night, do the lowest point in Death Valley first thing in the morning (thus accomplishing the goal of hitting the highest and lowest points in the Lower 48 within a 24 hour period), then casually drive back to Las Vegas, have a celebratory dinner, crash out at the Motel 6 again, and then fly back home.

The # of days were the same. Just adjustments (and added activities I hadn't considered; I didn't really realize how into geocaching my teammates were!) put into the mix.

Before I go on, I probably should quickly (hah!) explain, for the non-geocaching-initiated in the audience, exactly what geocaching is (skip to the black text a few paragraphs below if you already know and don't want to be extra-bored ;) ). In its bare bones breakdown, it is a high-tech treasure/scavenger hunt hide-n-seek....game (yeah, that's what it is, a game). Baaasically, someone hides a container somewhere in the world (in the woods, in the desert, in an urban environment, etc), takes a GPS coordinate reading, then uploads this to geocaching.com (one has to have an account to do this - and to get coordinates in order to go out and find them). Other cachers then plug the coordinates into their GPS units and go out and try to find said cache.

You would naively think that getting the coordinate information would make finding said cache very easy. However, in reality, you'd be surprised. Caches can come in all shapes and sizes, and be camoflauged very, very well. The GPS will get you to the area (and the accuracy may not be 100%). It's then your job to find the cache.

Caches can also be "virtual" - meaning that there is no actual, physical container at the location, but there is an object or view of some interest. In order to 'log' the cache for a find credit, you often have to answer a question about the object and/or have a photo taken - with your GPS (so as to prevent "vacation photos" from pre-caching trips) - at or with the object or view. Unfortunately, a few years ago geocaching.com decided that virtuals no longer consituted "real" caches and have banned the creation of any new ones - but the ones that existed prior to the ban were grandfathered in and many are still active and available for people to find. This is Good, because a number of places, such as pretty much all National Parks, or certain State Parks (e.g., North Carolina State Parks), places along the Appalachian Trail (notably in Pennsylvania), physical caches are not permitted. The best thing to have there, then, is a virtual. Especially if the location is some place cool or worthy of visiting. 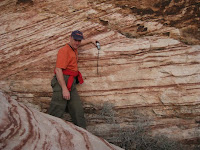 Recently there has been a resurgence in another kind of virtual cache called Earthcaches. These are generally geologic-specific virtuals that attempt to educate the cacher on the geology or geologic history of a given area. Photo to the right is of me (with my GPS) at an Earthcache in Red Rocks, Nevada, called "Ancient Dunes". (from the cache page: ...notice the alternating red and tan layers. These were formed while the dunes were still active. The inclined layers were formed when the winds blew the sand, and the sand stacked up on the windward side of the dune. Continued forward climbing movement of dune after dune resulted in the stacking of layer upon layer of cross bedded sands. After the sand turned to stone, the cross bed patterns remained.) To log this cache you had to measure a 1' section of the crossbedding and tell how many layers of crossbedding you had in that section, and upload a photo of you at the area.

Caches are also rated with a Difficulty Rating and a Terrain Rating, each scale from 1-5. (where "1" is about as easy as it gets, and "5" is extremely challenging, might require specialized equipment such as climbing or diving gear) The easiest caches (often called "cache-n-dash") are rated no more than 1-2 in difficulty or terrain. Some

of the best, though, are the harder caches. Photo to the left is of me, climbing up a 70' tall abandoned train trestle pillar, in the middle of the Potomac River, going after a Difficulty-5, Terrain-5 cache located at the top named "Psycho Urban Cache #13 - Impossible, Give Up Now!". As of this writing, I am the only person to have actually physically free climbed the tower; all others who followed have gotten to the top by the use of aid climbing up ropes. No mean feat in and of itself, mind you. Caches of average difficulty and/or terrain are usually considered "2/2".

All that said, some caches (physical, virtual, Earth) are very cool. Others are...not so much. Comes with the territory. Not everything can be perfect or awesome. Much more information can be found at geocaching.com.

The principle goals on this trip were to log the caches (there are two, one physical and one virtual) on top of Mt Whitney followed by logging the Earthcache at Badwater, Death Valley. Anything before, in between, or after was just gravy to the trip.

Sidebar: as you find and log caches, your "find count" goes up (assuming you bother to log them online). This generally gives people an idea of how experienced you might or might not be in this caching stuff. Prior to this trip I had found 1992 caches since May 2003. I was hoping Mt Whitney would be #2000.

The weekend of Aug 22nd arrived. I spent the two days sorting and organizing gear and clothes for the trip. Yeah, "just" a 5-day adventure, but in some rather temperature and climatically extreme environments. No technical gear needed, but other stuff definitely.

Sunday evening I turned in as early as I could (still wasn't until midnight), setting my alarm for 4:30am. Jeff and Dwight would be coming for me in a few hours...
Posted by Indy at 11:37 PM