As I crained my neck to catch any kind of clue about the 5th and final pitch, Aaron showed up and said that I would be best served combining pitch 4 (the traverse pitch) with pitch 5 (the final pitch) into one 170' long pitch. Yeah, okay. Still didn't know anything about pitch 5, other than remembering Carlos telling me that most of the way up the wall the crack you follow utterly disappears and you have to climb a slab to a bolt and beyond that another 30-40' to the anchors. Crap, I hate climbing unprotected sections of rock. But I had to remind myself, I've done stretches of unprotected 5.7 to 5.9 slab at Stone Mountain in North Carolina. I could handle this.

'He's going to be shitting his pants,' thought Aaron as he also told me about the unprotected stretch to the bolt. But at the moment I was more nervous about the downclimb and traverse.

So down I went, and over I sauntered, getting in a few pieces of gear to protect Michelle's traverse. Then I looked up. A long, broad black wall, split by a widening crack, was before me. The first third of this looked okay, but the wide section?? Crap, crap, crap, crap. I hate offwidths (offwidths are extra wide cracks, larger than hand or fists in width, that you can insert part or most of your body within; they usually suck for climbing and protecting adequately).

Normally my palms do not perspire while climbing. As I gazed at the offwidth crack (large enough to swallow me sideways with all my gear, and far far too large for even a #4 Cam to protect), my hands began raining sweat. Which evaporated quickly away in the dry desert air. Sighing, I continued up. Crap, crap, crap, crap, crap. And a few other choice words I've edited for family viewing. :-D

The wide crack proved to not be quite as daunting as I feared it was. There were holds on either side. And I could reach into the back of the crack for a couple of moves. But it was still unnerving, and I was unhappy until I got above it and got some more gear in the rock again.

20' later the crack utterly vanished as the rock went from black to white. I was at the slab...

Down below Aaron was chuckling, "Man, that guy is going to be shitting his pants soon!" :-D

I paused and gathered my wits. Looking around, I saw subtle bumps and small features to delicately climb on. I stepped up, transitioned my weight, reached up, palmed a bump, stepped up again. Delicate moves and then I could reach the bolt! I clipped it with a quickdraw, clipped the rope to it, and breathed a LOT easier again (it was a long way down to my last piece). I looked up to where I had to go next. And actually saw lots of slab-style foot holds and hand bumps to play with until I got to an overlap of black rock. And then I saw the line of weakness that broke the overlap a 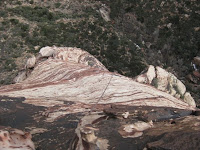 bove me in a crack-corner system. That's where I was heading, and I could get gear in there!

Partway up the overlap and crack I had the presence of mind to turn around and look down. Heh! Long way to the bolt! And a much, much longer way down to the ground. :-D But I was okay at this point. I plugged in a #1 Cam and continued up (in the photo above, the quickdraw to the bolt is the short dark line perpendicular to the rope at the edge of the visible white rock as the rope disappears over the lip to down below).

Moments later I was sitting pretty at the anchors, all tied in and happy as a clam. I could now finally breathe. :-) I brought Michelle up. As she climbed, I could take in the scenery around me. And off into the valley. Very nice views. 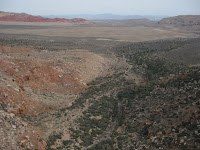 As the pitch was 170' long, it took Michelle a while to come up. And from my stance I couldn't see her for most of the climb. She had a nervous time doing the downclimb, and scolded Aaron and his friend for not talking to her to distract her more, but she got through it. Then over and up the crack, then onto the slab. 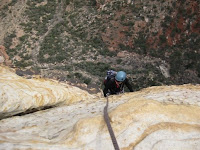 After that she got lost.

She had apparently wandered too far to the right below the overlap, entirely missing the crack that split it (I had not placed any gear at the overlap, but much higher above, feeling very confident on that section of rock). Finally she got course-corrected and came up the crack past the overlap. At this point I could see her once again. Moments later she was at the belay station, clipping in.

Hot on her heels was Aaron.

"So, how'd you like that slab section?" he asked mirthfully. 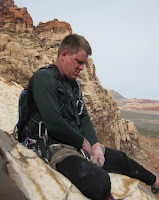 "Actually, not that bad. I've been on runout slab before in North Carolina. And it was quite easy after the bolt," I replied. We ended up chatting about climbing and then about caving, as Aaron is also a fairly active caver.

All the while we had been climbing up we had been wondering what became of Team Carlos. We figured we should have seen them at some point, either going up or coming down. Or at the very least heard them. Aaron then mentioned there was a guy and two girls coming up the climb below the 5th pitch of Cat. Might that be them? Had to be; no one else was on the climb today! Cool, they were coming up. We hadn't somehow missed them.

Anyway, our climb was done, and it was good. It was to go down.

The rappels basically followed the route up, but seemed to be set up in such a way as to be (mostly) out of the way of anyone climbing up. Especially on the last pitch, the rap down did not cross the climb up at all.

Michelle went down first, then I followed. As I was rapping down, I saw the Polish guy at the bolt on the slab, casting 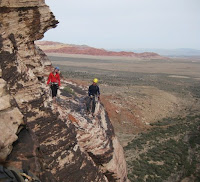 around for something to climb on.

He turned to me, and with a slightly nervous grin responded, "I am shitting my pants!!!"

This first rappel ended at the belay station at the top of the third pitch. From there we could look over to a ledge below the final pitch of Cat and could easily see Claudia and Carlo 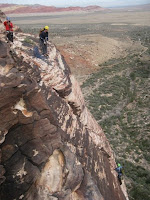 In the photo above you can see the Calico Rocks in the background. Through the trees in the lower left corner of the photo is the Pine Creek Trail. The large boulders on the hillside to the right of Carlos are single-family home-sized rocks. For scale. :-)

We reset the ropes for the next rappel. As Michelle went down, I could see Francesca, 50' below, working up the final section of Cookie Monster (see photo right).

Finally it was my turn to rappel down. I took a bunch of photos of Team Carlos on their ledge, then started down. When I looked up again, they

were all taking photos of me! Crazy kids...

The rest of the rappeling went smoothly. Michelle even practiced working with the autoblock, allowing her to go "hands free" on the rappel.

In short order we were down on the ground again, wrapping up ropes and gear, and making our way out. 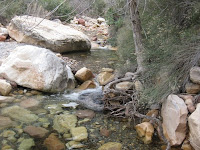 We collected a few rocks, found a more continuous "climber's trail" out to a couple of stream crossings (photo right), then were on the main Pine Creek Trail once again. On the hike out we weren't so focused on Mescalito, and could relax and look around at the surrounding terrain. Some very nice scenery around here (photo lower right).

As we continued on out we came upon the remains of a foundation. We would later learn this was the ruins of an old house built and lived in by homesteader Horace Wilson in the early 1920s (photo below left). Michelle took a nap 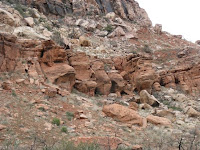 while I explored around a bit.

The final leg of the hike we turned offtrail to tackle a geocache that someone had set out barely a month before. It took a bit of trail and error to find the right trail back, as we kept getting blocked by thick short trees and walls of cholla cacti. But we eventually found the way in, signed the log, and headed back to the car. There we waited a while for Carlos and crew to come out, but it was getting late. At 5:45 we 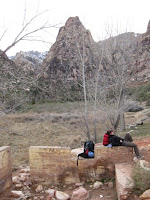 decided to wait outside the park at an overlook maybe half a mile up the road from the park exit. We left them a note and went out.

Half hour later we tried calling them. They apparently had already left the park and were heading back to Vegas! They had somehow misinterpreted the note to say we had gone back into the park to wait for them, and they couldn't figure that out at all. We were all tired and starving. After some miscommunicating phone tagging, we finally settled on a restaurant for dinner.

After dinner, back to the motel. Showers were had, and to sleep we went...
Posted by Indy at 9:59 AM