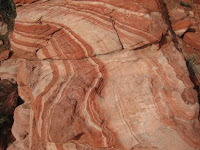 As I mentioned earlier, the rock here was very cool and neat. The layered swirls of red and grey sand dunes that we went past had a vaguely impressionistic look to them. I wouldn't be surprised if some New York artist painted this on a canvas and sold it for several thousand dollars at an art show. 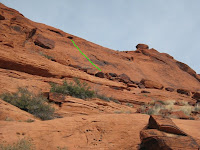 it was another bolted route, as I geared up and Michelle and Claudia flaked out the ropes, I left my trad rack reluctantly in the pack, and loaded up with all of my quickdraws. Gazing up the rock wall I could see the first four bolts fairly readily. I was admittedly a little bit nervous, for once again, a new route into the unknown. But I've been on 5.7 slab on Stone Mountain where pitches can run 200' with only a couple bolts for protection. Here I'd have 7 in 110'. That made me feel muuuuch better. :-)

Ropes flaked, I started to head up. The first bolt was 20' above me. I reached it with no problem. In fact, the getting to the next few bolts was almost boring. I grew concerned that my partners of the day would be in tears from such an unexciting route.

However, by the 4th or 5th bolt (can't remember now), the route got a little spicy. Sud 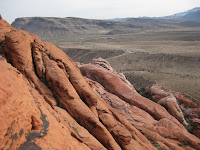 denly my attention was torn from the landscape behind me (see photo right; the parking area faintly visible is from where we started the morning; the visitor center is the low building in the distance before the hills) to finding exactly how I was going to make the next moves. NOW we were talking! I gingerly made a few moves up a steep section of the slab, delicately placing my feet on small holds, gripping edges with my finger tips, until I could get to the next bolt and clip it.

But it wasn't over with yet. The fun continued until I got to the last bolt, then the climbing eased off a bit.

We had thought to try and set a top-rope up on Clutch Cargo, a 5.9 to the right of Scent of Ultraman, but as I looked over to the anchors 15' away, I could not see an easy way of reaching them. I thought mayb 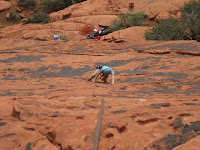 e I could get to them after rappeling down. So I continued up the last 15' into a semi-sheltered alcove with chains at the top of my route.

I then belayed Michelle and Claudia up. They came up without any problems, but both noted that they could easily tell when the 5.7 section hit. :-) (photo at left is of Michelle just getting into the 5.7 portion of the route). Then we rigged the rappel line and they went back down. I followed last, and attempted to bounce over to the anchors for Clutch Cargo. Alas, I was only able to get within 4-5' before I was pulled forcefully back by the extreme angle of the rope to the anchors we were rapping from. No way could I get over to set up the top rope. 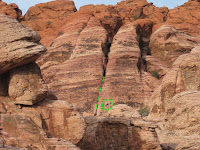 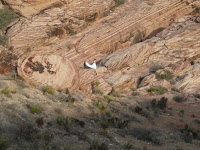 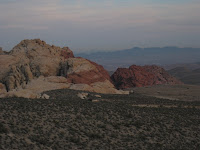 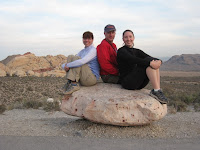