I was up early once again. Karyn trotted out to work while Jody and Francesca roused themselves. Francesca packed her stuff, as her redeye flight back East was to leave this evening. Our plan: to go climbing at Exit 38 (Jody was abstaining, heading back to Portland instead for studying that she's been putting off for over a week now). We three went to another local establishment for breakfast, then parted on our two paths.

The last three times I'd been out to Seattle, I always got at least one day of climbing in. Either up in Squamish (British Columbia), out at Leavenworth, or...at Exit 38. This latter was a small-ish area along Iron Horse State Park, which, at 110

miles from end to end and only 20' or so wide, is one of the longest and narrowest - if not the longest and narrowest - state parks in the country. Along this walkway hikers and bikers travel - and climbers play on the railroad blasted cliffs. Exit 38 is primarily a sport climbing/top-rope climbing area - meaning that it is heavily bolted (that's the norm) for people who want to lead climb, and for those who don't, there are anchors pre-set up top in order to top-rope from. The old guidebook (1996 by Bryan Burdo) to the area was 114 page spiralbound book offering 145 routes in three major areas: Deception Crags, The Far Side, and North Fork. The new book (2006, 2nd ed from a 2001 guide by Garth Bruce; 2006 guide image right) was greatly expanded. 248 pages, it offered over 100 new routes in new areas, color photos and maps, graphs, history to the area and to the growth of the guides, and "best of" lists for those people who don't have time to climb everything here, but are just breezing through.

In the past (2000, 2002) I had climbed at a couple of rocks at Deception Crags: Write-Off Rock and We Did Rock, doing the same routes each time. With the new guidebook in hand I wanted to explore new areas. For Francesca, having never been here before, anything we got on would be new and fun for her. So after having studied the guide a bit, I chose The Far Side, as it hosted one of the top-rated 5.7 routes in the area: Kiss Of The Crowbar. I imagine the name came from when the route was first put up, as the first ascent party was pulling and prying off loose rock.

Exit 38 is, as you might guess from the name, located off of Exit 38 on I-90, east from Seattle. So, pretty close to a major metropolitan area. Barring traffic, you can be from Seattle to crag in 30 minutes or so.

So after saying goodbye with Jody, Francesca and I headed out. The day promised to be bright, clear, sunny...and fairly warm. We were going against what late morning traffic there was heading to Seattle, and made good time. Got to Exit 38, then drove over to the parking area for The Far Side. Geared up and proceeded to hike in. Our destination was Interstate Park Wall, not quite the furthest of the developed crags (there is a lot more rock in the valley, but not all of it has been explored by climbers yet).

Getting to where we wanted to go took a little bit of time. About 30-40 minutes. But we eventually got to the area. And found a small group of people there! Turned out to be a couple guys leading a kids outdoor climbing session for a summer camp. They worked for an outdoor adventure business in Tacoma. They were very friendly and helpful, and offered for us to climb on any of their ropes that they weren't already using. That is almost unheard of back East. Outdoor groups there won't allow you to touch their ropes, and some can get downright hostile with you if you want to climb a route they have a rope on, but are obviously not using and aren't going to for some time. But I digress... 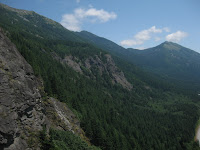 Looking around we could see more tall cliffs along the flanks of the valley, of which we were barely halfway up ourselves. 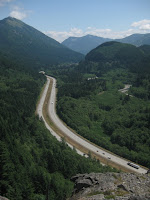 But it wasn't a full-on wilderness experience - I-90 was just down there, below us. You could easily hear the traffic from atop of the rock.

These rocks were not the railroad cut blasted rocks that I had climbed on at Deception Crags. No, these were naturally weathered rocks. It would be very interesting to climb on this stuff, see what kind of song and character the rock had to offer.

So after talking with the two guys a bit, Francesca and I decided to take them up on their offer and got on one of their ropes. The wall they were set up on, Squishy Bell, was pretty short. 25-30' tall. Average for something in central Maryland, but looking around at the exposed rock faces around the valley, this was barely a blip on the scree field. But it was rock, it was vertical, there were ropes already set up, and we were going to climb. 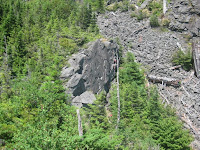 Looking over the selection of routes on the wall, most were pretty easy. So I opted for us to do the rope in the middle at the tallest point of the wall, which would cover Winter Rushing In (5.8) and November Glaze (5.9). 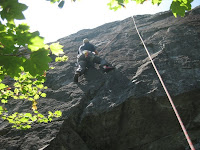 Winter Rushing In wasn't too bad. Felt a little easy for a 5.8, but it was a pleasant climb (photo right of Francesca on Winter Rushing In). Francesca went up after I came down. At this point the two guys started taking down their other ropes. They were going to move on to another area, having just finished lunch. We offered to help by taking down the rope we were climbing on, since they were so gracious as to allow us to climb on it. They accepted. I then scurried up November Glaze and topped off. That felt a lot more like a 5.9 in difficulty than what Winter... did for its grade. But it was still a neat climb. 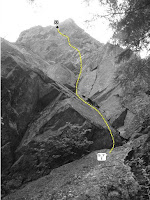 We gave to the two guys their gear as they took their charges and went back into the woods. I still wanted us to do Kiss Of The Crowbar, and we were already practically on top of it. Just a matter of finding the start.

We went around to the bottom of the overlook and started trying to match up the topo photo in the guidebook with what we saw of the rock (topo photo left). We found it readily.

As all the rocks here are top-rope or sport (bolted), we did not bring any trad gear with us. Just quickdraws and slings. I racked up while Francesca flaked out the rope, and up I went, trying to follow the bolt line when I could see the bolts. At first I went off too far left because I saw a bolt there, but nothing in the corner. But I managed to get re-oriented and got back on route again.

The route was pleasant. Not superbly fantastically great, but not bad. And didn't feel 5.7 in difficulty to me (felt more like 5.5 or 5.6, given my experiences in the East; then again, I've noticed in general that routes out West tend to feel 'softer' or easier than their posted rating vs. routes in the East). But it was still climbing. 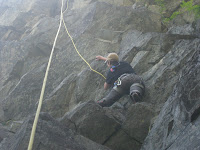 After I went up, Francesca followed (photo right), cleaning off my 'draws as she went up. I then opted to try the 5.8, Attack Of The Butter Knives, off to the left. The start was a good 20-25' away from the start of Kiss Of The Crowbar, but the two routes converged about 1/3 of the way up and Attack Of The Butter Knives finished on Kiss Of The Crowbar.

...Butter Knives felt a good deal more difficult than Kiss Of The Crowbar. Definitely more in the 5.8 range. But not impossible, just attention-getting. Once I was past the two cruxes, I was back on Kiss... . I lowered off and let Francesca have a go at it.

Then we were done. It was getting late (4pm), we still had to get back in time for dinner with Karyn and then get Francesca to the airport. We packed up and took an alternate trail out.

At this point all the after-work climbers were showing up. We met no less than a dozen coming up the trail on our way out. Yep, this is a popular area. 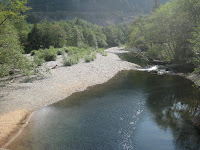 Once back down on the road we opted to stop at the Snoqualmie River. 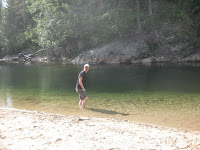 It was much hotter now, down here, and in the sun. The water was inviting and cool. Unfortunately, neither of us had thought to bring swimsuits, so we just waded in as far as we could, and played with the river rocks a while. And okay, yeah, the water was pretty cold (photo right of Francesca expressing how cold it is). But definitely refreshing! And very clear - so clear that you could see where the rocks across the river went into and under the water, and formed underwater cliffs. 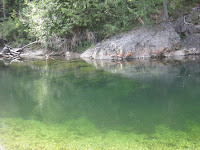 The river wasn't overly deep at this point, but I had a brief wish to have had either my snorkel or scuba gear with me to drop down and explore the bottom. Ah well. Another time...

After our wade we got back to the car, and made the drive back to Karyn and Bob's, doing an admirable job of going against pretty much all traffic there was! Had to take three different highways, and by gum, the main rush hour flow was always opposite our direction. Go us! 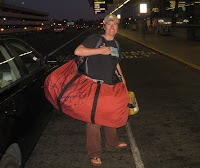 After dinner Francesca got herself packed and the car loaded. I drove her down to the airport and dropped her off. Her adventures here in Washington were now coming to a close. But for me, I still had one more day to do stuff.

On the drive back I had hoped to catch a second glimpse of the noctilucent clouds, but instead I was treated to lower altitude clouds that dropped rain. However, they were localized (mostly localized over where I was driving!), and off to the west, along the horizon, there was a break, and I could see the reddish sky of the deepening twilight. And the sliver of a thin crescent moon. No place for me to stop off of I-5 to easily get a photo, I just glanced at it when the opportunities allowed, between raindrops and cars.

Back at Karyn and Bob's it was my turn to pack. After breakfast tomorrow I intended on heading back out to the area we were just at today and do some geocaching hiking. Then meet up with another friend of mine named Karen whom I haven't seen in years, then get myself on the plane for the flight home.
Posted by Indy at 10:49 PM