With snow flying all around me, I rolled over as best as I could to try and self-arrest. The snow had the consistency of slush. I couldn't stop. Laying sideways, my pack preventing me from rolling fully over onto my front, I dug my feet in, as best as possible. Still I flew down the glacier.

Finally, after more than 100', I slowed. The ice ax was digging and dinging off of the solid ice beneath the snow. But I finally slowed, and stopped. I was just past halfway down the last line.

A little frazzled, I gathered my spinning thoughts, moved back over to the glissade trough, and with ice ax planted even more firmly, started down again.

Fortunately I only had just under 600' left to go. And a few moments later I was rapidly coming to the end of this glissade. I rolled out of it and self-arrested in the thicker snow at the bottom of the glacier as the angle tapered off. I didn't really have any desire to slide into the rocks and the creek that formed from the snowmelt off the glacier. Video below that Jody took (camera turned on end, not realizing - like I did the first time I took video - that "orientation matters").

{Whew!} That ride was over! Time to hike out.

Jody marched ahead, chilled a bit from the cool winds coming down off the glacier. Francesca and I lingered a while longer, changing out of some of our layers, then we followed Jody. 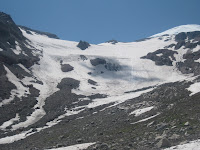 A while later I stopped again to change out further, as I was getting very hot. Francesca continued on to catch up to Jody. I was with them a moment later.

With a bit more than 3 miles to go, we all were ready to just get out. As we had no need to be roped together, and I knew they wanted to move, not stop, I decided to plow ahead because 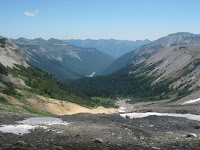 I wanted to slow down and take some photos on the way out, and I didn't want my slowing down to slow Jody and Francesca down. I took one last look back at the Inter Glacier before I headed down the trail. Photos right are looking back up the Inter Glacier, then looking down the White River valley. In the distance you can see the White River cutting through the center of the valley. In the Inter Glacier photo, looking closely, you can see the zig-zaggy white line of the glissade track, and the greyish areas on the shoulder of the glacier up and left where the snow has melted off, leaving only ice. The dots you see on the glacier near the glissade track are of other climbers heading up. Mt Rainier is the blue-white snow dome to the upper right corner of the photo.

Most of the rest of the hike out was anti-climatic. The trail was level, it was all downhill. There were views of the valley at first, until I got into the woods, then just views of flowers, small meadows between the trees, a waterfall and the river. A few glimpses of the mountains around were afforded. 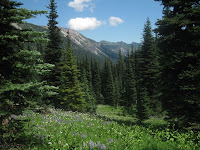 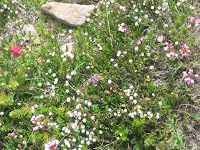 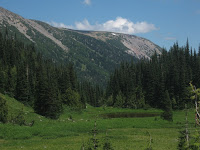 Photos: view down valley while still fairly high above the White River along the hike out, more wildflowers (Indian Paintbrush and some purple bell-types whose name I can't remember), and a view back up valley towards Rainier. 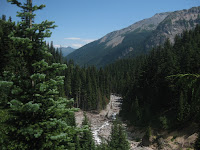 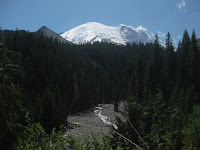 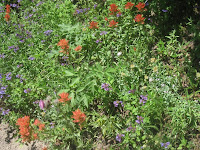 Photos: the White River, a waterfall by the trail, and a view back of Rainier with detrius from the 2006 flood strewn across the river-carved water way. 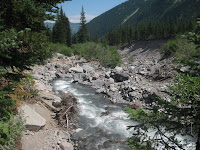 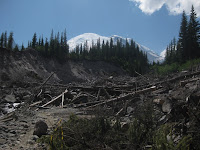 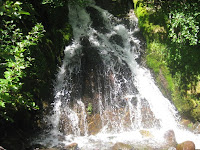 After I had marched and photographed for a couple miles I was pretty hot. I stopped, dropped my pack, and wandered over to a point where the river was accessible from the trail. The grey-white water was roaring past in a frenzy, as if in a rush to get further down valley and join other streams along its way to the Pacific. I watched it for a moment, then got down on my stomach, stripped off my hat, and dunked my whole head under, up to my shoulders. 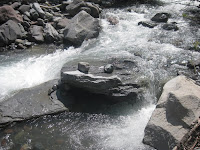 I wanted to soak my feet, but there was still a mile to go, and I didn't want to put wet feet back in the boots. So I dunked my head a second time.

Feeling better, I continued onward. I thought for sure Jody and Francesca would show up at any time (in fact, I thought they would catch up to me while I was head-dunking), but it wasn't until another 20 minutes had passed before they caught up to me. In the meantime, I napped a wee little and read up on the info sign at the trailhead, learning a bit about the damage the 2006 flooding had caused, and about the Starbo mining operation that used to be here. From the plaque:

In the quiet alpine setting of Glacier Basin are abandoned shafts and rusted mining equipment
Early prospectors were convinced this area abounded in rich copper and silver oe. Between 1914 and 1930 the Mount Rainier Mining Company dug several tunnels and prospect pits, and erected a power plant, a hotel, and an aerial tranway. All the claims lay in steep terrain above timberline. To extract a profit, a truck road out would have to be built and maintained on landslide debris. And geologists in 1950 found little value in ore samples from Glacier Basin.

There was also a warning to stay away from open shafts. 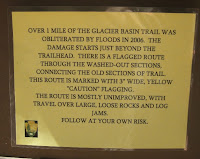 Now I finally knew why most of the Glacier Basin trail was so level and smooth - that was the old truck road that had been installed in the valley. However, with the 2006 flood having destroyed a chunk of it (nothing on Earth is forever), this made the new trail a little more challenging. But not impossible, after the park service worked on it since last year. Together again, as a trio, we marched out to the parking lot. The final 1000' feet of the hike dishearteningly on pavement. BUT, we were elated, we were happy, we thought we had summited Rainier (though see also the comment under Day 5, Part 1), the goal I had had for some 10 odd years. It was time to go back to Seattle. 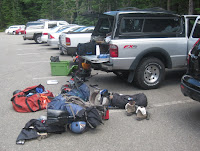 We re-weighed ourselves and packs. I found I had lost some 11 or 12 pounds on this trip! Wow. Forget Weight Watchers, just go climb a damned mountain! :-D A passerby took our photo for us, and we repacked Jody's truck. We left and headed back to the Ranger Station, singing Queen songs. 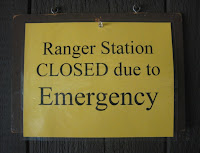 At the Ranger Station no one was about. Sign on the door - oops. Something Bad happened to somebody. Probably a hiker. Certainly not something on the mountain. Rangers down here are far too far away to be of assistance there. That's the purview of Dave, and Phunuru Sherpa. I hoped nothing untoward would happen to the climbers up there currently, especially given the deteriorating snow conditions.

We headed back to Mountlake Terrace, and Bob and Karyn's place. For their unimagined and unasked for hospitality of hosting us and all our gear at the start of the trip and for the next few days after, we wanted to buy them dinner. Bob told me of a good Mexican place: Todo Mexico. Sounded good to me. I recalled after my first trip to Rainier, Bob, Aqua and I had stopped at a Mexican place in Emunclaw. Probably one of the best meals I had had in a very long time.

We took a quick detour to REI, dropped off the rental tent, and I glanced through the local climbing guide books. Hmmmm. There was an updated guide to the Exit 38 area. I'd been there before. So decided to pick that up. It would later prove very useful.

An hour or so later, as dusk settled on the land, we arrived to Todo Mexico. A stern-looking Middle Eastern guy opened the door for us. We explained we wanted to put in for a take-out order and did so. Then Jody went to go get her truck washed while Francesca and I waited. I asked for an iced tea while we were waiting. It came speedily. Ahhhhhh. Good, cold iced tea. Haven't had one of these in days...

We got to chatting with the stern-looking fellow. He was in his 50s, and originally from Iraq (still has family over there). Once we got talking with him for a minute or two, his sternness melted away and he proved to be warm and friendly. Actually, a talkative guy, after all! Turned out, he was the owner of the Todo Mexico chain of restaurants. Very cool. Unfortunately, I forgot his name. Well, Bob and Karyn go there often enough; they probably know him.

Our food came out, and we made our farewells, heading out to pile into Jody's truck (she had just gotten back from the wash). A few minutes later, after a couple of wrong turns on the highway ("you can't get there from here!"), we made it to Bob and Karyn's, where we sat down and feasted. Then we each took showers while Bob was packing for his extended weekend backpacking trip to NW Oregon (he would be leaving at o-dark thirty in the morning, while we were asleep). We unfortunately wouldn't see him again after tonite, for he would not return until after we had all returned home.

I stayed up as long as I could chatting with Bob, but finally exhaustion overtook me, and I crawled into bed, sound asleep.
Posted by Indy at 7:48 AM