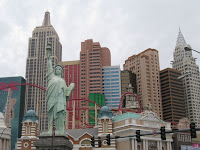 Carlos was the first of us to awaken by a good bit, and had stepped out to his rental car to reorganize gear or something. I vaguely remember waking to the sound of a car door closing, then a soft, gentle knock on the motel door. Not realizing anyone had left the room, I thought it might be some random drunk person from the night before knocking on the wrong room. Bleary-eyed I got up and opened the door to find a grinning Carlos standing there. When did he get up? I never heard, but went back to bed, still bone tired from the weekend's adventures. I drifted into nap-hood for a while. 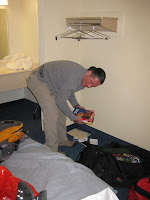 However, within an hour or so we got ourselves roused. Showering one last time, we finished packing annnnnd....back to CoCo's for breakfast!

During breakfast Francesca regaled us with stories, tales, and lessons learned from the days when she was for all intents and purposes a professional gambler. We learned you had to set win/loss limits (depending on your conservancy, <2-10%), style="font-style: italic;">everybody up, which is why private tables are more desired than open by gamblers who have a clue), how to tip, what is a "shoe", how many decks are in a dhoe (6-8 typically for blackjack), when to know when the house has changed the game rules on you (which they can if you are winning too much), etc, etc. Very educational. 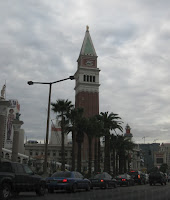 After breakfast we were going to need to return our cars, but we still had over 2-1/2 hours before our flights. As we were on the exact opposite side of the airport from the rental return, we figured we had about 15-20 minutes to drive further up The Strip, see whatever we missed the night before, see what we saw last night in the daylight, and get back to the airport in plenty of time.

So up The Strip we went. We saw Caesar's Palace, Italy/The Venetian (complete with a replica of the St Mark's Square tower that I got to go up in last year when I was in Italy), Treasure Island (or pirate island, or something like that; I wasn't familiar with it, but the rest of the group was), and the Luxor (which we mostly saw just at night with its beacon of light firing straight up into the air; I had tried for some night photos of it, but they failed to turn out as my little point-n-shoot wasn't up to that task). 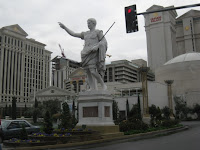 But then suddenly it was time to go. We hustled down to the airport. Francesca, Michelle and I stopping to pick up some sandwiches for the plane flight back, Carlos and Claudia to go gas up Carlos' car before turning it in (Michelle had gassed up her car the night before on the way back from the rocks). Before splitting we said goodbye to Claudia as she was heading back to North Carolina via a different path of flights than us.

At the airport we waited for Carlos for a bit, but he hadn't shown yet. We figured we'd better just get our bags checked and meet him at the gate (since we were all going to board together). After checking bags I got separated from Michelle and Francesca at Security as I got into the slower lane. I saw them get through and be on the far side while I was still trying to get to a bin. Then they disappeared.

Unbeknownst to me, they had forgotten to empty their water bottles of water, and were being sent back around again. I figured they had just taken off to the concourse and gate w/out me, figuring I knew where I was going. So once through security, I headed on down to the gate, only to find none of my crew was there! Urrr...yep, B10, got the right gate. Where were they? I found a set of seats near the window that would allow for all of us to sit together while we waited, pulled out a book and began reading. That's when Michelle and Francesca appeared and relayed their tale of water woes. A few minutes later Carlos arrived. And ou

Before long we boarded and all ended up sitting in the rear, as we were one of the last groups to get on. I didn't get my window seat, but an aisle. Still, I was able to snap a few pics, some last views of Vegas and Red Rock before the plane turned and headed East. The flight back was uneventful.

Once we landed we made our way to get our luggage. A short time later it all appeared. Nothing lost! Either comi 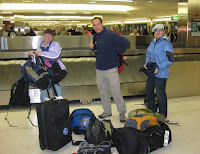 ng or going! We said our goodbyes to Francesca, who hopped the bus to the train to the metro back to DC. Carlos, Michelle and I left together, then split up ourselves later to go home.

All in all, it was a good trip. And there's plenty more to do and explore out there. I'm sure we'll all be back!
Posted by Indy at 9:44 PM