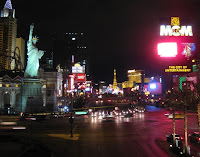 The sun set as we drove back to the motel. Carlos and Francesca were running a bit behind us as they decided to stop off at the in-town rock shop. But that actually helped with the logistics of everyone getting a shower without overcrowding. Once we were clean and changed, it was time to hit....The Strip!

The Strip is Las Vegas' famous line of city blocks filled with a multitude of visually stimulating hotels, casinos, shops and a plethora of other attractions, all just two blocks away from our motel. At night, the place is just lit up. Not a place any self-respecting astronomer would normally be found! But this wasn't an astronomy trip. So here I was...

Both Michelle and Francesca had each visited Vegas in the past, and knew certain things about the town: where to go, what to see, what to avoid, and even when to run (seriously). I would "learn when to run" before much of anything else this evening...

We were partially torn between wanting to see some of these sights, and wanting some food now. No one offered up any specific suggestions (other than to try and avoid chains that we can always eat at elsewhere in the country), so Francesca offered up she wanted babyback ribs. Okay! A decision made. 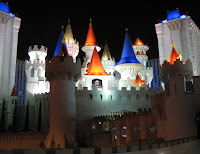 Michelle led us to the Excalibur, a castle-like area across from New York New York. Their motto: "You Rule". We came into a huge foyer area with several hallways and rooms leading off of it. I was trailing behind, having stopped to take some photos, so didn't get to take the surroundings fully in before I realized the group was heading back out again. "We're leaving!" announced Michelle or Francesca amid the general cacophony of the room. I noticed a young ma

n in a black suit still trying to entice Claudia and Carlos over to a desk with what looked like a terminal on it, saying "Let me show you what I can do for you."

"That's how they suck you in," stated Francesca as she swept past me. "They give you $50 of free credit to go play, then you get sucked in and can't leave." As we departed post haste I glanced back to see the casino/slots room beyond where the young man was standing, and to see him eyeing out the crowd to find some other hapless people to draw into their tangled gambling web. 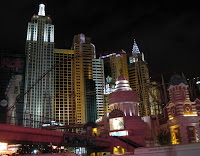 Michelle had good memories of New York New York and led us over there. She said the last time she was here, you could go past the Coyote Ugly bar and see the dancing show from outside, so no need to pay to go in. Her intent was to take us past there so we could catch a brief view, then go find some food options.

Well, Coyote Ugly's was not a happening place when we arrived. No dancers. Just people sitting in there drinking. We didn't even linger. We were seriously getting hungry.

We wandered through a stretch of NY NY, but Michelle couldn't find what she was looking for. So we exited and continued going up the street. 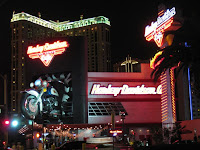 We wandered down a few more blocks, past some construction, when I spied a Harley-Davidson BBQ place across the street. Wait, BBQ? I pointed, and the group made an immediate right turn and bee-lined straight for it.

Being a Sunday evening, it was all that crowded. We were seated within a minute of entering. Our waiter was a f 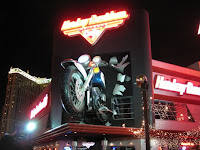 riendly dude named Bob, who heralded from Ohio many years ago, but was now living out here. He took our order and made sure we were well-stocked with drink. The thirsty desert climbers that we were.

Looking around, there were vintage Harley-Davidson motorcycles all around - on the main stage (where, for a price, you could have your photo taken by an in-house photographer), suspended in the air, etc. As well as various paraphenalia and photos and posters related to Harley-Davidsons. I wondered if the quality of the food would suffer and the real reason you came here was for the ambiance.

But the food, I have to say, was quite good! I would certainly go back here again. And the prices? Not that outrageous. About what one might expect to pay at a moderately expensive restaurant in the B'more region - $15-25. We even decided to get some desert, which I chose to share with the group the Harley-Davidson's version of a chocolate lava cake. It was pretty darn good. Michelle, Francesca, and Claudia helped me eat it. Carlos decided he was going to get his own and polished that off himself. Hungry boy!!

Satiated, we headed out to just take in the sights at this point. Made our way up to the Bellagio and caught the water/music show. It was pretty cool. When we first arrived, the lake was quiet. Music was playing from loudspeakers hidden in the palms aligned around the lake. We stood along the concrete railing and chatted a bit. A few minutes later we noticed that a line of dark objects had protruded slightly from the water out in the middle of the lake. 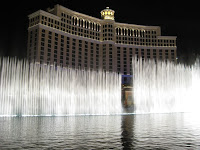 Then the music got quiet...

The first wall of water shot into the air, illuminated by white lights, as the music swelled and soared. More walls of water FOOMed into the air, as the lights illuminating the lower half of the Bellagio itself subtly changed from yellow-white to purple. Then, to the music, the water spouts started...dancing. Swaying back and forth, criss-crossing at times, rising and lowering in a sinusoidal wave pattern 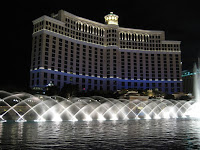 s, and even spiraling about. I should have taken video instead of stills. But you can get an idea from these photos, anyway.

It all lasted about 4 or 5 minutes. Then with a final few FOOMs, the music quieted, the lights dimmed, and the water walls died off. The nozzles sank slowly beneath the surface of the lake once again, as if nothing at all had just happened...

We headed across the street to see (but not enter) Paris, and back down the direction we came until we got to the MGM Grand, which was located diagonally from Excalibur, across from New York New York. From there back to our room, wh 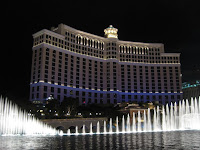 ere we began an initial packing of gear. Our flights tomorrow were around 10am, so we wouldn't have a lot of time to organize come morning.

The long day took its toll, though, and in the midst of the repacking and organizing, we dropped off one by one. Morning would be coming all too quickly...
Posted by Indy at 2:05 AM