The Rainier Quest - Prologue and Day 1

Sometime in the mid-1990s I realized I had taken on the project of climbing (or "climbing", in some cases) to the highest point in all the states. This is also known as highpointing. By the end of 1998 I had gotten to the highest point of 41 states as well as the District of Columbia. At that time the remaining high points were either significant hikes or serious undertakings requiring some technical skill and equipment.

In 1999 two friends, Aqua and Bob, were willing to go with me on two of these high points: Mt Hood in Oregon and Mt Rainier (photo right) in Washington. As Bob lived just outside Seattle, he availed himself to the local mountaineering groups to learn what he needed to safely climb glaciated peaks. Aqua and I, living out East, had no such resources. But...we had Mt Washington in New Hampshire, to practice winter condition climbing. To which we did (a very much unfinished trip report here: http://indy-adventures.net/library/mtwash99.html).
Later that summer Aqua and I flew out to Washington, met up with Bob, and drove down to Oregon to tackle Mt Hood (a trip report that never got posted). We were successful, saw glaciers, crevasses, and the huge-assed bergschrund near the summit, large enough to swallow 3 freight train cars. In May 0f 2002 it would swallow 9 climbers, killing 3 of them, and would bear witness to a tragic helicopter crash (http://www.youtube.com/watch?v=fhfJDq_I1HA) during the rescue attempt. A stupidly sensationalized (why, I have no idea, as it is already dramatic enough as Real Life w/out the extra "thwop-thwop-thwop" and shit :-[ ) History Channel excerpt of the events here http://www.youtube.com/watch?v=qO1F6iqsUUE), where "hikers" the narrator mentions are the mountain climbers who fell.

Our next stop was Mt Rainier. Unfortunately, due to not understanding the National Park schedule, permit requirements, and true distances along the trail, as well as altitude effects while carrying 70-odd lbs packs, and finally the weather, we never got above 9500 feet (Camp Schurman) on that trip. We would try again in July 2000, but Aqua would succumb to altitude sickness at 12,500'. Rainier is 14,410' tall. Long way to still go up. My third attempt (http://indy-adventures.net/library/rainier3.html) would be in 2002, when Bob would accompany me along with my girlfriend at the time, Fabrizia, and another friend and highpointer,

Chris, to the mountain. We camped at 9800' (Emmons Flats, see photo left) that trip. Unfortunately, Bob wasn't feeling up to the summit attempt and opted to remain in camp when Chris, Fabrizia and I went up. The three of us would eventually fight our way to the crater rim of Rainier, in the face of 60 mph winds gusting 80. But we would not make it over to the Columbia Crest (1/3 of the way around the crater from us), the 14,410' highest point of Rainier. The third time was not, as the proverbial expression puts it, "the charm".
The years then went by. I took on other adventures, other projects. But all the while Rainier remained in the back of my mind, taunting, awaiting for me to return.
In 2007 upon hearing my previous Rainier stories, my friend Jody expressed an interest in climbing the mountain with me, after getting back from her trip across SE Asia. Awesome! A few other friends also expressed interest as well, but always time, schedules, and Other Obligations prevented a full commitment to a set (or general) date. So Jody and I sought a third person for the team (it is possible to do the mountain just as a team of two, but having three is far better, should Anything Bad happen). For a while Jody had someone lined up, but that fell through. Then I found my climbing friend Francesca had an interest in tackling mountains. Enthusiastic at having a shot at Rainier, she began training hard (http://www.francescamclin.com/blog/training-for-mountaineering/). We set our goal to be the summer of 2009.

Unfortunately, Life(tm), schedules, time, work, and even weather, interfered with most of the training I was planning (biking to work 2x a week, climbing up/down 6 flights of stairs with a 30-50 lbs pack 3-5x/day 2-3x/week, etc). I was lucky to bike to work once every couple of weeks, and lucky to do the 6 flights of stairs 3-5 times once a week. Really, Rainier was going to kick my proverbial ass. As were Francesca and Jody (Jody was hiking local mountains and Francesca was 1: working out on stairs and 2: gone out a week earlier than our trip to take a mountaineering course in the Cascades).

Again, due to outside influences (work being cut off from the internet for 2 weeks, my not having internet access at home for the same 2 weeks, Other Life Events, etc), our trip planning became VERY last minute. Almost non-existent. And then with just a few days before my flight out I finally got a chance to email the people I knew out in Seattle that we were coming. Nothing like Last Minute Charlie stuff on this trip!

But in the end things were going to be what they were. There was still gear I needed to pick up at REI out there (Seattle) that the REIs in Maryland/DC didn't carry (and had no time to ship). So anything Jody and Francesca also needed (in addition to food) we would get there (plus Francesca rented us a 4-season tent for the climb from REI, so we had to go there to pick it up :) ). 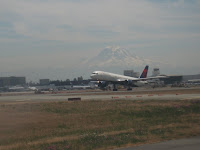 Finally, July 17, 2009, I flew out to Seattle. An uneventful flight in which I was afforded grand views of Rainier both while we were flying in, and as we were taxing down the runway to the terminals. After I got my bags, Jody picked me up and we went off to wait a few hours for Francesca to get back from her mountaineering course on Shukstan.

To pass time, we swung by the Pikes Place Market, a WELL-known destination in downtown Seattle. Here you would find several blocks of crafts, artisians, produce, misc food, fresh seafood, and the world-famous F 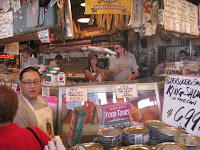 ish Throw. This is a show the guys (and the occasional gal) at this particular seafood shop put on for the tourists. One guy goes out into the audience, and another takes a healthy-sized fish and tosses it out for the first guy to catch. The first guy bobbles it a while, in good show, but fully under control, then heaves it back across stands and the counter to the second guy. In the image to the left you can see a standard-sized fish in mid-air, with the girl about to catch it (it was her second attempt ever at catching, as you might see from her facacial expression, and succeeded on this try). 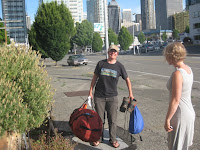 ly a supplier to outdoor stores like REI. Who knew?

After our quick breeze through there, off to the north side of the city did we head to pick up Francesca (right). Once we had her collected, off to Mountlake Terrace to see and stay with my friends Karyn and Bob (same Bob who had been with me on my first three Rainier attempts), who were waiting for us with dinner grilling (bottom left). 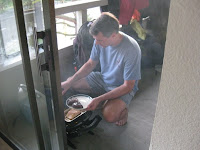 Once we arrived, introductions made, our gear dragged in and distributed across their small deck, we ate, chatted a while, then finally drifted off...to sleep. Tomorrow would be our final gear-up and supply day before we would head in to The Mountain.