Red Rock Canyon, Nevada. A climbing mecca minutes outside of Las Vegas. A wintering over destination for guides from Seneca Rocks (WV) before they discovered Thailand. And one of those 'mystical' places I had heard of but never aspired to visit because I was under the impression that it was all "seriously hard" climbing.

Then I slowly learned over the years of a few friends who had gone out, climbed, and not only survived, but had fun. Maybe there was something this gumby-wannabe climber could do? THEN another friend of mine, Gayle, whom I had met geocaching, and who had then become a climbing newbie, headed out there, hired a guide, and climbed a 4-5 pitch route called Cat In The Hat. Well heck, if she could do it and have fun, there's gotta be other stuff out there I can climb! So I started idly dreaming....

December 30, 2008. I get to work, open my email, and see the following from Francesca, a climbing friend of mine in DC:

QUICK! NYE fare sale on Southwest to Vegas - Who wants to go to Red Rocks? $160 Round trip

What? Red Rock? Heck yeah! And in the end, five of us signed up for the trip: Francesca, Michelle, Claudia (from North Carolina), Carlos (who had been to Red Rock once before), and yours truly. We set the date for near the end of February (weekend covering Feb 19-23) and we were set! But as work was really swamping me under faster than a sinking ship, I let them "argue" the hotel and car rental details. 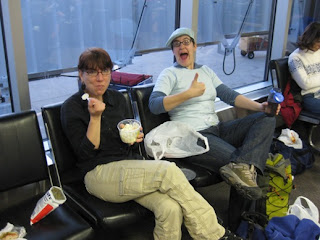 Finally it was time. Feb 19 had come, and after work I met up with Carlos and Michelle and we headed off to BWI where we met Francesca (Claudia, flying from NC, flew separately from us, but would arrive in Vegas within 10 minutes of our landing, so the timing was nigh perfect). We checked in, got through security, and hung out, eating dinner (Michelle, Francesca, myself) or sucking on a lollipop while fussing with iPhones (Carlos)

We arrived Las Vegas late in the evening local time (note: Las Vegas is 3 time zones west of the East Coast, so it was getting on quite late for us!). We hooked up with Claudia, and we all trooped over to the Thrifty rental car area, where we had reserved two cars. 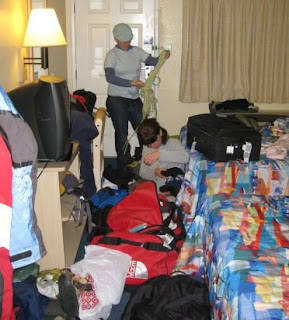 The next hour took....forever. There were maybe 6-8 people in front of us, but two clerks working the counter (and occasionally one of them took a break), and the going was....glacial. But finally we got our car (at this point there were nearly 30 very unhappy and grumbling people in line), and headed to the hotel: a Motel 6 a couple blocks off of The Strip, and literally right on the opposite side of the airport from where we egressed! We piled the five of us into this tiny hotel room, watched our bags explode as we dug out and sorted gear, then crashed for the night. Tomorrow we would be...climbing!