My vibrating cell phone alarm thingy woke me with a start. It was 4:30am. I had enough time to get a shower and gather my bags before Jeff and Dwight would arrive to pick me up for our run to the airport. I showered, dressed, got my bags, and stepped outside. Jeff called; they were 5-10 minutes away. The night air was fairly warm, h 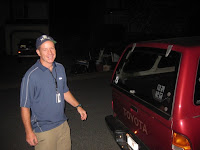 umid. Much as it had been the past few weeks since I got back from Rainier.

10-15 minutes later Jeff and Dwight pulled up. Jeff lept out, helped me toss my bags in the back of his cachemobile, and off to the airport we zoomed!

Being that Jeff is a SouthWest pilot, one of his perks is being able to, when not on duty, still park in the employee parking area and take the employee shuttle bus in - and drag any friends along whom he might have with him. Sweet! Free parking, shuttle ride to the terminal - everything except actually carried on the plane.

We arrived BWI with no difficulties. Made our way through baggage check-in (Snurt had some issues with the machine not accepting his bags, but that was the only hiccup we suffered). Through security we whisked, and to our gate went strode. Stopped briefly to grab a breakfast, eat, then onto the airplane we went!

Being that I checked in with SouthWest a bit late (midday yesterday) and Snurt first thing yesterday morning, I was further back in the pack of passengers for loading. I ended up not sitting with them. But I still somehow got a window seat!

We took off, and in the next few hours I relaxed, napped, read, and stared out the window, the latter particularly during the last couple of hours flight, watching the changing terrain 36K feet below us go from plains to southwest mountain and river canyons.

We arrived Vegas a little early (20 minutes early!), and landed so damned gently that I and others around me swear we did not feel anything until the nose came down and the engines were set to breaking thrust. I think I've had only one other landing ever that gentle. All others have been the standard thumps and bumps, with a couple of near break-the-wheel-strut impacts. Compliments to the captain on that landing!

We gathered our gear and located Harold/ridgeseeker waiting not too far away. Having the use of cell phones (a technology I still don't fully embrace) made hooking up easier. We then headed over to the car rental zone, where Marty/flyingmoose was waiting for us. Snurt had secured a rental of an Expedition SUV, which would accomodate all five of us (snugly) and our gear (snugly again). 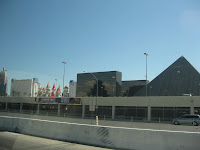 Finally we were on the road (photo left: back in Vegas - but not for long!). Destination: Lone Pine, CA.

But we would be making a few stops along the way...

Our first stop was Indian Springs, Nevada. Indian Springs is a small desert town along NV 95 north of Las Vegas. It is home for both the Thunderbirds flight team and the new Predator remote controlled spy plane. And two geocaches, of which we would be doing one.

We worked our way to the south edge of town and found a place to park. 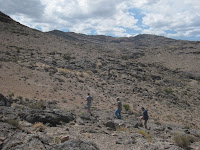 Jeff and a couple others of the team had the coordinates for this geocache already loaded in their GPS units, so hauled them out and faced the direction the arrows were pointing.

Atop a fairly substantial hill.

Sooo, up we went!

Now, mind you, this isn't a wooded forest like we have back East, or in the NorthWest. This is the SouthWest. Scrub, desert, dry heat, and unforgiving rock to scrape oneself against. It's all there.

The hill turned out to be rather steeper and taller than what it looked like from below. What was about a 0.3 miles and change horizontal hike was probably closer to 0.5 miles one way. Now, half a mile doesn't sound like a lot. But add it a little bit of altitude, dry heat, rough terrain, etc, it was not a trivial outing.

We eventually got to ground zero (image lower left is view of town from near cache hiding spot). Jeff made the innocuous find (photo right), an ammo container under one of many piles of rocks. We signed the log book, checked for "travelers" (travel bugs or geocoins, objects and coins that do not sit in a cache for trade, but are meant to travel from geocache to geocache, 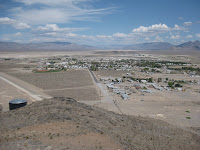 sometimes with no other goal than to move around, sometimes with specific goals such as to have photos taken of it in specific places, or to visit certain places in the state/country/world, etc), then hiked back down. I was fairly parched by the time we got back, and downed 1/3 of my liter of water. Never been in the desert this late in the year before, and didn't have a full appreciation for the impact. I suddenly did now!

It was also at this point, back at the SUV, I realized this wasn't a casual caching adventure. This was a serious geocaching adventure, with the prize caches being the ones atop Whitney and the one at the lowest point of Death Valley. Wasn't what I was expecting. But then again, I didn't internet poke ahead of time just how active my fellow teammates were. For example, Snurt had over 3000 finds at this point, and Jeff over 7000. Flyingmoose had about 1800, but he's been at this for four years (and skips a lot of the very easy caches, preferring mostly the challenging ones). In comparison, I had just shy of 2000 at this point in the trip, but I've been caching for nearly 6-1/4 years (and I do the easy caches as well as the extra difficult when possible). And while Ridgeseeker had only over 200, this was because where he lives up in Alaska, there ain't all that many geocaches around.

But I digress. But I should warn you now: the rest of this entry is mostly about geocaching and some of the neat things/places we saw/went to. The actual Whitney climb isn't for another couple of entries. ;-)

Before I go on, I should also note that geocaches all have unique names (though this is not to say no two caches may have the same name, much like two people might have the same name ;-) ). This makes it easier to identify caches. 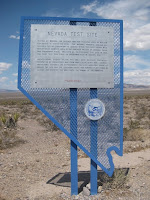 Our next cache was simply called N.T.S. Couldn't figure out what that meant until we got to the roadside sign (photo right). Ah! Made much more sense then. And according to the map, right there to the north of us was the Nellis AFB Bombing Range. A rather...scrubby, desolate landscape, really. The airforce base is visible, 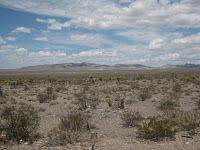 nestled next to the mountains in the far, far distance (photo left). The cache find itself wasn't very challenging. It's main purpose was to get people to stop and read the sign, get a little educated on the area. It did me. I "knew" the airforce used areas of Nevada for bombing tests and whatnot, but I didn't know where.

Now I have a clue. I'll have to track down Area 51 next, see if they'll give me back my damned spaceship...

ANYway, we marched on. Stopped for gas and drinks in Amargosa Valley. There we saw an ad for the largest firecrackers in existence (photo right). M-800s?!? That's a nearly freaking stick o'dynamite! Yeesh. 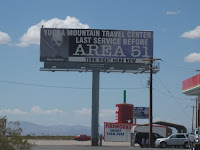 Alas, we weren't actually going to Area 51. That'll be for another trip...

A bit outside of Amargosa Valley we stopped to do a cache called Don'tgoifyoudon'twannaglow. We all thought this might lead us to an interesting location, but alas, it was one of the lesser challenging and not very interesting cache spots: just a flat, flat scrub and sand desert with absolutely nothing remarkable. The cache was an ammo can, tucked next to one of a billion scrub bushes. We were all rather disappointed after doing the cache. We left without looking back. 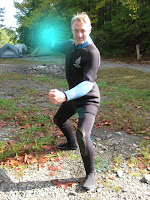 It would only be later that I would learn about the after effects of being there, and the unusual powers that I had acquired. Peter Petrelli's got nothin' on me! But that's another story, for another time.

And yeah, it involves monsters. 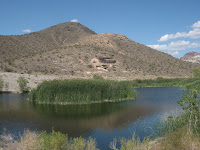 We continued on up the road. We stopped for a bit to do a cache at Gold Center, a few miles south of Beatty. The cache was simply called Gold Center. And it took the seeker(s) to the old ruins of the town of...you guessed it, Gold Center. As we pulled off the main road and onto the dirt path, we could see the ruins of the Gold Center mining operation halfway up the hill (photo left). 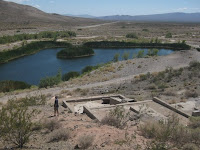 It's claim to fame was the first brewery in the area, built underground to maintain a cool temperature, with the service above ground. Gold Center also had its own newspaper in 1907. Gold Center was a very busy town for most of its life. It was a stage stop on the way to both Rhyolite and Carrara. All three railroads (The Tonopah & Tidewater Railway-T&T, the Bullfrog Goldfield Railway-BG, the Las Vegas and Tonopah Railway-LVT) ran through Gold Center during this time. The only traces of the town left, (photos right and below left) 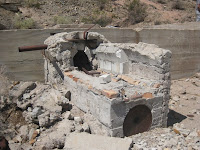 are part of the cement base of one of the stamp mills and the tank foundations of the cyanide plant on the side of the hill, to show that people lived and dreamed there.

We did the cache, which was above the ruins, then explored the ruins for 10-15 minutes before the heat of the day drove us back to the SUV and on the road once again.

Our next stop was in Rhyolite. There are a half a dozen caches in/around Rhyolite, but we were only going to do one or two. The one we were all interested in doing was a two-stage cache at the old cemetery (a multi-stage geocache means we had to get information at one area in order to get the coordinates for the next or final part of the cache, located somewhere nearby; multi-stage caches can be two-, three, or heck, even ten-stage or more challenges). 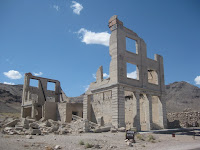 We would save this for the drive out. First, we wanted to check out the ruins and remains of the Rhyolite ghost town. 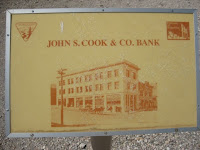 There were a number of ruined structures around. The photo right is of the Cook Bank. The image to left is drawing on info board of what the bank used to look like "back in the day". Most of these old buildings were in serious disrepair. However, the train depot was in pretty good condition (from the outside view, at least). This is probably because it was the only structure fully fenced off from the general public. 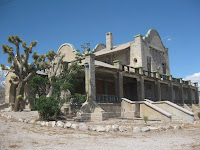 There was no cache here in town. Most of them were scattered around the outskirts of town. But we didn't go looking for any of them. We still had a lot of ground to cover to Lone Pine, and there were other goals various members of the team wanted to accomplish yet today.