I'm rather new to this whole blogging thing, and as such do not yet know what the etiquette is in blog length or # of photos to insert. If I were doing a standard fare trip report I wouldn't concern myself about it too much, but this is a different format and venue, so...

The new morning we awoke relatively early locally, still being on East Coast time, and in pain, from so little sleep. We went up to Coco's Diner near our motel for some breakfast. The waitress, a middle-aged lady from Washington (state) was a hoot. The food was...eh, so-so. So-so enough that I almost put in a veto on going back, but glad I did not as the food improved over the weekend. 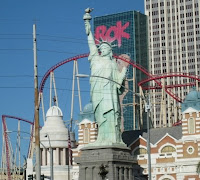 As we were on a budget, we all got the "breakfast special" for $4.99. Which came with eggs, meat (bacon or sausage), pancakes or waffles or toast, and fried potatoes/hash browns. I got my usual addition of milk, juice, and water, only to learn when we got the bill that the milk and juice, while in huge glasses, cost more than the breakfast special did! The glass of milk alone cost the same as a half gallon jug of it back home (eep). I decided to lay off milk the rest of the trip. Stuck with juice to help ward off any nasties I might or might not have picked up on the flight out (and later back).

After breakfast we jumped in the cars and headed out to Red Rock. The trip out would take us past/through The Strip perpendicularly, and we caught a quick glimpse of some of the man-made wonders in this area. The most prominent was New York New York, which was just down the block from our motel.

We had agreed at breakfast to split up into two groups. Carlos, having been here before, had a much more focused direction in what he wanted to do: a 4 pitch 5.6 named Geronimo. Francesca wanted to go play on that with him. Me, I had a much looser agenda and did not want to get committed onto any serious multipitch routes. I was looking for one, possibly two-pitch, routes to play on, and get used to

the rock out here (very different than out East). I took Michelle and Claudia with me and we ended up in the "sport climbing area" (mostly bolted routes). I was hoping to do a little trad climbing, but top-roping and sport leading would be fine for this day as well.

As we left the city limits, we could see snow in the mountains to the west. Looked chilly up there. We figured Carlos and Francesca, going into the mountainy section of Red Rock, might get a little cold. We, being down in the lower elevation section of the rocks, would be just warm enough. :-) 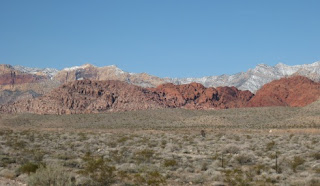 As we got close to the entrance, we could see the RED in the rocks quite easily (we could see it from the city limits as well but it was too small in the photos to come out well here). This was where we would be climbing today!

Our first stop was at the Red Rock Canyon visitor center (and thanks to CG for sending me her annual parks pass right before she moved to Malawi!). It is a very nice facility, with a small gift shop, an information stand, and a nice-sized display area that talks about the history of the region, the flora and fauna, the mount 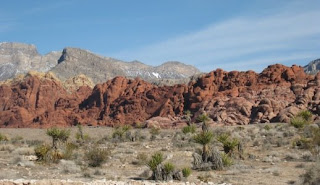 ains, and...rock climbing! (a whole display on rock climbing to educate the non-climbing visitor about those crazy-@$$ed people up on the rocks :-D ).

After making a quick round through there (and picking up a few souvenirs or info material), we headed up to the first Calico Rocks overlook.

The rocks in the Calico band look like someone took mud dollops and dropped them in plops along a rough line, atop of each other. Very...different feel to this area. Didn't look like there was anything to really climb, mostly just scramble around. Until you took a closer look and then saw the people. Tiny dots in a sea of rusty red... 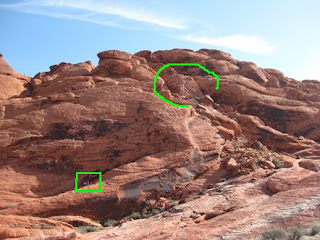 (in the image, the people are in the green square; the partial green circle was the spot we were aiming for).

The rock here is a sandstone, and there are three distinct sections to it: the tan rock, the red rock, and the striped rock. The striped rock, which we did not climb on this trip, is basically petrified sand dunes that compacted down, and periodically had water leach through them in regular layers to remove the red oxidation in the rock (this is, btw, a very very VERY drummed down explanation of the geology info plaque at the overlook).

Our goal today was Panty Wall, which has the highest concentration of moderate routes in the area. Of the 14 or 15 routes listed in my guidebook, I figured I should be able to climb at least 10 of them. Lead up the easier ones, drop a top-rope and climb the harder ones. I had visions of being able to knock off most of the routes in this area.

Little did I realize that other groups would be here, too, on such a beautiful day (isn't this a Friday; aren't y'all supposed to be workin'?). As it would turn out, we would only climb three routes here, and all off the same anchor point, as the main Panty Wall area (to the lower right of the partial green circle) would have a large group on all the relatively easy routes, and a few people on the harder stuff.

Getting to the walls here is no trivial matter. You might look at the area and think, "Oh, yeah, just go over here, around the corner, up 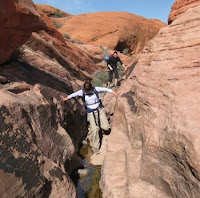 that rock ramp, step there, walk there, around that corner, and voila!" But the reality is a leetle different.

First off, "going around the corner" could mean you end up in a dead-end canyon. Or a narrow canyon that you have to bridge off of both side walls to not slip down into a slot, or mud, or in today's case, water! And navigating once in the maze of sloping rock? Unless you have a real good sense of direction, nigh impossible. All the landmarks you saw fro 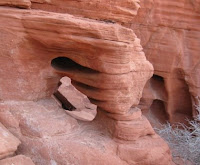 m the overlook vanish. You might catch a glimpse of one or two later, but you'll often be at a different angle and they could very well not look like what you thought they did from earlier. It can be very confusing.

Some of the formations in the sandstone, from wind and water action, were very very cool. And the views out towards the main mountains (where Carlos and Francesca were climbing in one of the canyons) was very majestic. 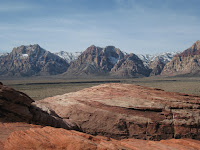 In the end, we managed to get to Panty Wall. When we left the parking lot, there was a large group of 8 or 10 following us. Some of them had been here once before, so knew "the way", and they beat us to the main wall. That still left the upper slab that I had wanted to hit first open. :-) We hustled up to the base of the wall a 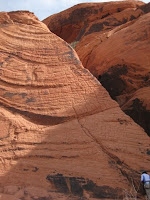 nd flaked out a rope. It was relatively short, only 60' tall, but it would be my first climb out here in Nevada, and first time on this type of rock. It felt gritty, and, well, sandy (odd for sandstone, no? ;-) ). I had some concerns about my feet skating out from beneath me while I climbed up. But in the end my fears were not to be justified, and I went up the bolted 5.6 route (Panty Prow, which rises up the left-slanting ramp arete in the photo) with no diffic 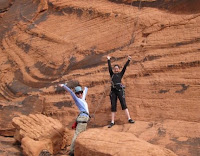 ulty. However, it looks easier than it is, because the other side of the arete is a sheer wall and a drop into a rather deep canyon. Little exposure for the first climb of the area. :-D After I came down, Michelle and Claudia took their turns. Once we were all done and down with this route, we could now officially say we had climbed in Red Rock!

After this, we decided to top rope the harder bolted route up the face. I thought this was supposed to be Victoria's Secret, a 5.10b, but I had misread the guidebook topo and it was actually Panty Mime, 5.10d! I struggled and struggled and struggled to get up this route (and by 'struggled' I mean I fell a lot). I finally made it, but it was not at all pretty. Michelle went second, and did a better job than I, but she, too, had problems. The footholds verged on imaginary most of the time, and the handholds? Even less. Claudia went next, and did a far superior job than either Michelle or I, but still had some problems here and there. After she was down, we rechecked the guidebook, because the face between the bolted 10 and the arete I had led looked interesting, and we couldn't believe i 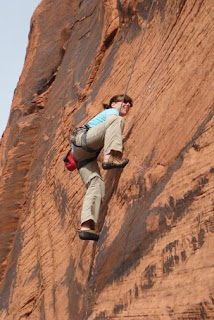 t wasn't an established route. And that's when we realized I had misread the book earlier! We were struggling up the 10d route! So we each gave the 10b a go. I was still beat from my encounter with the 10d, so went last. Michelle scampered up the 10b, having problems only at one point. Claudia also scampered up most of it, but took a slightly different finishing line than Michelle. I went up and mostly followed Michelle's path, as that seemed to me to be the "natural" line. It ended up getting very close to the arete climb on the right, but the two never actually crossed paths. I managed to finish it okay. :-D

After we were done with this, it was lunch and lizarding time!. We ate, napped in the sun, and explored the immediate surroundings (partly to find a place to use the b

athroom :-P ). Then we packed up to move down to the lower section of Panty Wall, but there were more groups there. I had a Plan B, however, and so we went over to Ultraman Wall, where there was a 100' 5.7 route waiting for us...